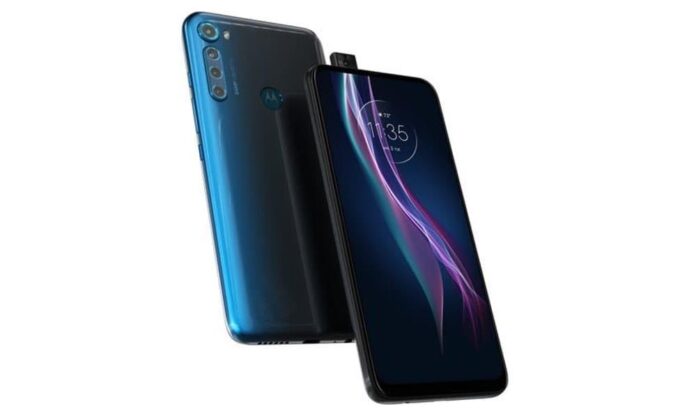 After Motorola’s latest Edge series phones, the company seems to be planning some new One-Series smartphones. Latest leaks have surfaced from Poland over the Motorola One Fusion Plus and One Fusion, hinting at the pricing and specifications of these upcoming mobile devices. It is rumored that One Fusion Plus is priced at €299. We do not know about the price of the One Fusion in detail, but this should be lower, according to the name of the device and its place in the series.

Motorola announced its 2nd mobile phone with a pop-up selfie camera, the Motorola One Fusion Plus and Fusion One, just six months after the Motorola One Hyper last year. It has a 6.5-inch 1080p display with no notch or hole-punch cutout like its previous version, but the new smartphone features several internal and external diverse enhancements over the One Hyper.

The most noticeable difference is on the rear side of the mobile phone. You will discover a quad-camera array consisting of a 64-megapixel along with an 8-megapixel wide-angle camera, a 5-megapixel macro camera, and then a 2-megapixel depth camera. The One Hyper had a more straightforward dual-camera design, by comparison. There is also a larger 5,000mAh battery, 6GB RAM, and driven by a quicker Snapdragon 730 processor. The One Fusion Plus also has an FM radio receiver — a feature not present in the previous device — while the 3.5 mm headphone jack is retained.

However, in some respects, the One Fusion Plus has been downgraded a bit. For example, it has a 16-megapixel sensor within its selfie pop-up camera instead of a 32-megapixel one. Fast charging is also relatively slow at 15W, especially in comparison to the 27W. The One Hyper was capable of in Europe, although the US model can still charge up to 45W.

These distinct changes have led the device slightly cheaper than the last model. When it releases in Europe later this month, the Motorola One Fusion Plus will sell for €299 (around $337), €15 less than the One Hyper. Currently, there is no word on a release from the US.

The Motorola One Fusion is rumored to get the same HD+ display size but with lower resolution; it’s also probable to have a Samsung sensor, along with 8-megapixel, 5-megapixel, and 2-megapixel cameras. The One Fusion also will be available in multiple RAM and storage options and is said to have a bigger 5,000mAh battery and will come in blue and black colors.

Motorola One Fusion Plus Key Specifications