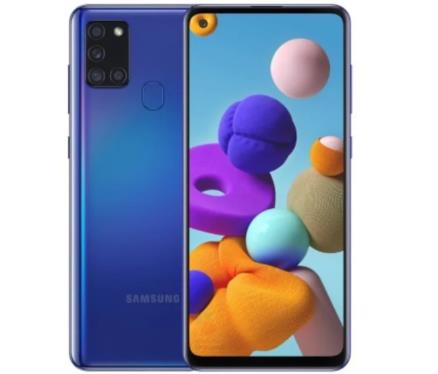 It is reported that the Samsung Galaxy A21s is priced at around $216 (around EUR 200). Galaxy A21s has leaked several times, and now a fresh leak brings several renders that indicate color options and design information. The Galaxy A21s’ price was also leaked, along with the specifications of its possible availability. The report suggests that the Samsung Galaxy A21s can carry a hole-punch display with the cutout mounted at the top-left corner of the screen. There are four cameras alongside a fingerprint sensor at the back.

Galaxy A21s will be priced starting at $216 (around EUR 200), according to a report by WinFuture. The storage models are said to begin at 32 GB, and sometime around the end of this month is expected. Also, the website showed some phone renders in Blue, white and black colors. The leaked images show a gradient back panel design, and the volume and power buttons on the right edge of the screen are placed. Within a rectangular camera module located in the top-left corner of the back panel, the four cameras at the back are mounted in an L-shaped manner.

Check out: Samsung Galaxy A51 with 4 Cameras and double storage.

As for the specs, the Galaxy A21s is expected to run on Android 10 and features a PLS TFT 6.5-inch HD+ (720×1,600 pixels) display. It is driven by the 850 octa-core Samsung Exynos SoC and 3GB RAM. Internal storage variants could include 32GB and 64GB with the flexibility of further expanding capacity using a microSD card.

It is confirmed that the Samsung Galaxy A21s carry a massive 5,000mAh battery and that connectivity options include a headphone jack, Bluetooth 5.0, USB port, and NFC. It is also reported that the Galaxy A21s will not feature 5G network support and can feature a rear fingerprint sensor. The Galaxy A21s tipped to be around 8.9 mm thick and about 191 grams weigh.