Lenovo X1 ThinkPad is now available to order from Lenovo 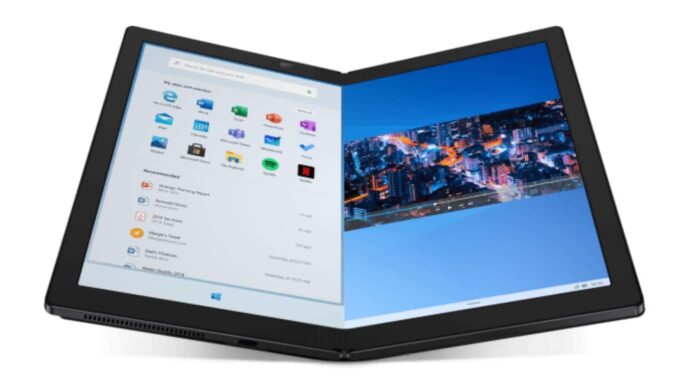 Lenovo launched a ThinkPad like no other ThinkPad you’ve ever seen before: the Lenovo X1 ThinkPad. Think about Samsung’s Galaxy Fold, but a laptop screen with 13-inch OLED. It’s now available for preorder, starting at 2,499 dollars.

When fully unfolded, the premise is to use the Fold like a broad tablet (or divide the screen into two adjacent displays). Like a complete 13-inch laptop, with an optional removable keyboard and easel stand, you can prop the Fold up horizontally to use it.

The Lenovo X1 ThinkPad can be folded up to 90 degrees, turned vertically, and used as a mini laptop (a touchscreen keyboard pops up on the bottom half). You can transform it horizontally and, with an optional stylus, use it as a script. Or you can fold up the entire thing and bring it around comfortably without taking up plenty of space in your pack. Despite other specifications, Intel Lakefield processors, two USB-C ports and a SIM card slot, 8 GB of RAM, up to 1TB of storage, and a 50Wh battery are included in the Lenovo X1 ThinkPad. It weighs 2.2 pounds and can be supported by 5G support.

Check out: Lenovo Carme smartwatch (HW25P) is ready to be launched

The ThinkPad X1 Nano, which is the lightest ThinkPad ever made at 1.99 pounds, was also revealed by Lenovo. This ThinkPad is based on Intel’s latest Evo platform, which is intended to certify, among other features, that laptops offer long battery life, fast charging, and a fast boot time. Intel’s 11th Gen Tiger Lake processors, Wi-Fi 6, and Thunderbolt 4 need Evo systems.

The Lenovo ThinkPad Nano has a 13-inch display with 2K 16:10 (with touch and non-touch options). Lenovo claims it’s about the same height as a 16:9 14-inch screen. And it comes with a range of AI protection features: it can sense, for example, when you walk by and wake up and lock yourself when you walk away.

Specs-wise, the Nano comes with up to i7 Intel 11th Gen processors, up to 16GB RAM, up to 1TB storage, a 48Wh battery, four 360-degree microphones, and integrated graphics from Intel Xe. It also supports 5G and can, in addition to Windows 10 Pro, run Linux.

Lenovo also announced several additions to its ThinkBook line. The $729 ThinkBook 13s Gen 2 (which is also Evo-verified), the $879 ThinkBook 14s Yoga (the first convertible ThinkBook that has an integrated pen), and the $549 ThinkBook 15 Gen 2 are the flagships (which comes with built-in Bluetooth earbuds). The 13s and 15 have AMD options as well.