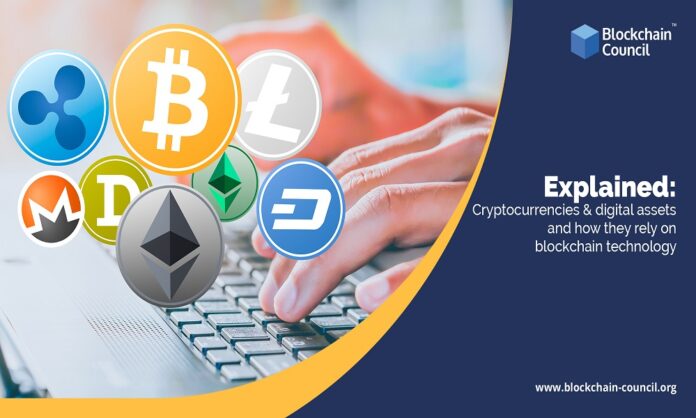 Cryptocurrency trading, a well-known term of 2021, is constantly increasing its user base. People are willing to learn cryptocurrency trading to try out the world of digital money. Today, there are nearly 5.8 million active users of Cryptocurrency Trading around the world. The Crypto world is considered safe in data privacy as it runs by blockchain technology; crypto and many more digital assets also rely on blockchain. It is known to be one of the best networks for data safety. Let us see how digital currencies and investments depend on blockchain technology.

Cryptocurrency is a type of revenue that can be traded online between companies, individual producers, and other users for goods and services. Numerous organizations have created their digital currencies, popularly known as “tokens, ” which can be exchanged explicitly for the products or services that a particular organization offers. They resemble casino chips or arcade tokens. You’ll have to trade genuine money for the cryptocurrency to obtain the company’s goods or services. Some of the well-known cryptocurrencies are Ethereum, Tether, Binance Coin, Cardano, XRP, Dogecoin, etc.

What Are Digital Assets?

In easy terms, a digital asset is content that is compiled digitally. Instead of creating a conclusive rundown of document formats that qualify as digital assets, we can say that a digital asset can be any form of content within any format that is put away digitally and offers a significant value to the organization (or to the client or purchaser). However, here is the list of some digital file formats that come under this category:

How Cryptocurrency and Digital Assets rely on Blockchain Technology

Cryptocurrencies operate utilizing blockchain technology. It is a decentralized network distributed across numerous computers that oversee and documents exchanges. The security offerings by blockchain play a considerable role in making this technology appealing. On the other hand, the different types of digital assets hugely depend on blockchain technology as it permits digital data to be recorded and disseminated quickly, along with keeping it from being modified by other users or hackers. Cryptocurrencies and digital assets rely on blockchain because of its immutable nature and robust security mechanism.

Check out: The Level Of Anonymity You Can Address With Bitcoin

● Blockchain technology addresses the issues of safety and trust by chronologically storing the new blocks. This means new blocks are only added to the end of the chain. In Bitcoins, each block has its designated place on the blockchain network that cannot be shifted.

● Once a block is added to the blockchain network, it is not possible to return and modify the contents of the newly added block except if the majority of users in that network agree to do so. The block is immutable because it has its hash, which is also connected to the previous block’s hash with the time of occurrence mentioned clearly. These hash codes are made by a mathematical evaluation that transforms digital data into a series of letters and numbers. Hence, any editing in data changes the hash codes too.

● Blockchain doesn’t store any of its data under a central authority. In place of this, the blockchain is imitated and circulated across computer networks. Each computer in the network automatically gets updated with the addition of new data. This way, blockchain makes it hard for any external forces to make changes in data stored in blockchain unethically. In any case, if a hacker gets access to blockchain data, he could only affect one of the copies of the block rather entire network. This corrupt copy will instantly get noticed by other networks.

● Due to decentralization, all exchanges and changes can be straightforwardly seen by either having an individual node or by utilizing blockchain explorers that permit anybody to see exchanges happening live. This implies that you can track down Bitcoin and other digital assets any place they go. This makes blockchain ideal for data exchanges that multiple sources can use for reference.

● Blockchain allows users to review the complete trail history of any asset. Using asset identifiers, users can find out who modified data and at what time.

With numerous valuable applications, blockchain technology is already being executed and explored by various platforms. Blockchain has made a name for itself, not just in cryptocurrencies Cryptocurrency Trading but also in all types of digital assets.

Check out: How to Become A Blockchain Expert?

Check out BLOCKCHAIN COUNCIL by visiting www.blockchain-concil.org to learn blockchain from highly experienced professionals and to attend cryptocurrency certification programs.