Escape from Tarkov – How Do Extraction Points Work? 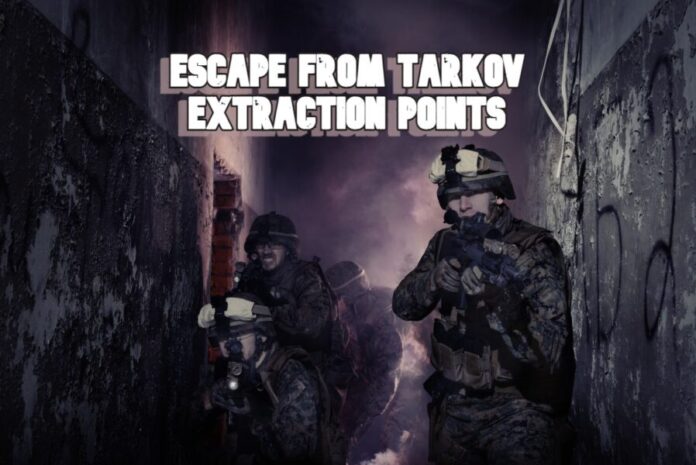 In Escape from Tarkov, there is a fair bit to get your head around. Whilst on the surface you may want to head in and kill as many players as you can. But ultimately, your main goal to do exactly as the game title suggests, which is escape. To do this, you will need to use extraction points throughout the game. So, if you want to learn about more than Tarkov items, lucky scav junkbox and other features that you will be getting used to, then here’s what you need to know about extraction points.

Escape from Tarkov is something that is becoming more and more popular in the shooting realm of gaming. Its popularity more than likely stems from setting itself apart from the usual shooter formula. You are tasked with having to traverse across large maps, looting and scavenging for items. This, of course, sounds very close to the battle royale formula that we have seen rise to huge popularity with titles such as Fortnite, PUBG, and Apex Legends amongst others.

Despite these similarities, there is a key difference that gives Tarkov its own spin. You can make your way out of the match within a time limit, which will give you the opportunity to keep everything that you have found so far. With this, we have extraction points to help you to escape. Only one of three extraction points can be used in each match, though the methods that you come across will vary depending on the extraction point itself.

What are Extraction Points?

Before a raid starts, go to the Therapist merchant to get a map of the relevant location. By doing so, you will have the ability to see where the extraction points are on each map before starting. Whilst the raid is underway, you can hold down the “O” key to find a selection of which extraction points there are available to you in the raid. There will either be a question mark next to them or there will be a blank field. If you have a question mark next to it, you will need to meet certain parameters in order to use it, such as money or Tarkov items, so working with the system of bitcoin tarkov has to offer might help. If it’s empty, you won’t have to do anything additional to use it.

How do Extraction Points work?

In Tarkov, each map has different extraction points in them. The ones that you use will depend on the whereabouts you spawn. It will also depend on whether you are playing as a Scav or a PMC. You do have guaranteed extraction points on either side of the map. The game pushes you in a direction where you are going to have to get from one area of the map to another, so you are crossing the map. This should give you a good indication of where you need to go. Simply head over to the other side of the map from where you spawned to get to where you need to be.

There are ways for you to spot where you need to go for an extraction point too. Even though they aren’t exactly clear on where they are on the actual map, you can still get an indication of where they might be. If you for example come across the UN Roadblock, you will see the necessary barbed area to give you an inkling. There are also other factors such as green smoke and others so you know where to find what you’re looking for.

If you want to get a better idea of where to find the extraction points on each map, then there are ways for you to do so. You could try to play the game offline, so that you can figure out where the extraction points are on the maps that you’re using. This is a great way for you to also get an idea of where the best loot locations are so you are getting ahead of the game.

So now you should have a much better idea of how extraction points work in Escape from Tarkov. With this knowledge, you will be able to use it to your advantage to discover where the relevant extraction points are. Remember that you can use the game in offline mode, which is a great technique to use if you want to find out a bit more about how they work. The system as a whole does a great job of setting this game apart from similar titles too.

Have you managed to get used to Escape from Tarkov extraction points? Let us know in the comments section below!