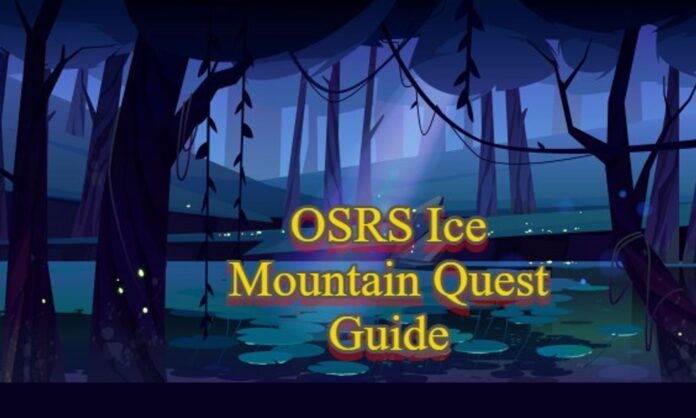 Are you looking for a quest that is free-to-play, and can help you earn a few OSRS gold plus more rewards that can benefit you? Then check out Below Ice Mountain. This quest won’t require you to part with much OSRS GP, but you will need to get yourself some bread and a knife. A pickaxe with level 10 mining is also needed, but the rest of the OSRS items we need we can get during the quest.

Starting the Quest with Willow

Our first task is to go to Willow, who is found to the south of the Dwarven Mine entrance over at Ice Mountain. Willow is a so-called archaeologist who will inform you that she has located a door beneath a pile of rocks. She will request your help since she doesn’t want another archaeologist to come along and take credit for finding it.

Therefore, we need to agree to help her. You’ll be required to convince her team to help her, though they have fallen out with her. The three people you need to speak to are Checkal, Marley, and Burntof. You can speak to these characters in any order you wish.

Check is the strongman who can be found in Barbarian Village. You will need to prove your strength to him if he is to join up with Willow again. To do so, you will need to train with Atlas, who you can find over in the Long Hall tavern. Atlas will agree to train you, which will see a cutscene following and you will have the ability to use the Flex emote. Head back to Checkal and use the emote, after which he will agree to help.

As the name loosely suggests, Burntof is a master of explosives. This time, we are heading over to Falador to the Rising Sun Inn. He will be drunk and ask you for a drink. Buy one from the bartender and give it to Burntof, who will then agree to join the team on one condition.

You are going to have to beat him best-of-three in a game of rock, paper, scissors. No matter what sign you use, Burntof will help since he’s too inebriated to play anyway.

You will have been told to find Marley’s whereabouts from Charlie the Tramp, but you can simply go straight to Edgeville ruins to find Marley instead. The thief will want a steak sandwich that you can get from the Blue Moon Inn. Since Marley was banned from the inn, it looks like you’ll have to get him one yourself.

Head to Varrock and speak with the cook in the inn. He will still refuse to make the sandwich, though he will tell you of the art that is involved. With a knife, some bread, and cooked meat, you can make the sandwich then take it back to Marley who will also agree to help.

Heading to the Ruins

Now that you have the crew ready, it’s time for you to go through the ancient doors found to the west of Ice Mountain. Speak with Willow and the crew will start unblocking the entrance to the area. With the rocks removed and the traps disabled we can head in.

Willow will reveal that they aren’t actually archaeologists, but rather grave robbers looking for a big score. She won’t want you to stitch them up to the authorities and plans to kill you. Unfortunately for her, Burntof sets off a trap that wakes up the Ancient Guardian, causing the team to make a run for it.

You can either kill the guardian with your normal combat skills, or you can mine to four pillars found in the room. This will cause rocks to fall and eventually kill the guardian. It’s not too difficult, so you don’t have to worry about having a Twisted Bow or anything. Either way, loot the OSRS items from Willow’s bag once you have defeated it. You will see the doors going further down lead to a dwarf, Ramarno who has been inside these ruins having survived the Runecrafting Crusades.

For completing this quest, you will receive a quest point, 2,000 coins, and access to the Ruins of Camdozaal. You aren’t going to need to buy OSRS gold to hit all the requirements for this quest, so don’t worry about going somewhere that has OSRS gold for sale. It is a short but fun quest for you to participate in. It’s also available to players who have free accounts, so you don’t need to have full membership in order for you to play it.

Have you completed this OSRS ice mountain quest before? Did you enjoy finding what lies beneath Ice Mountain? Let us know in the comments section below!

Check out: What You Must Know About the Bitcoin Wallet