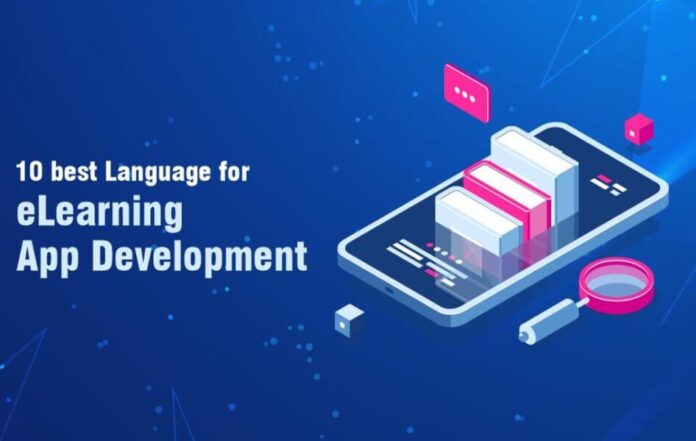 COVID-19 has deprived 1,2 billion students worldwide of traditional education. Not too long ago, such a scenario would have appeared absurd; today, schools and institutions convert to online classrooms without difficulty. By 2025, the online education market is projected to reach $350 billion. After games and business apps, the third-most popular category on the App Store is education apps. We will now explore the most OK programming languages for eLearning app development and walk you through the development process so your organization can remain competitive or discover new startup chances.

Top ten programming languages for the development of eLearning app:

Since its inception, Java has been the most popular and widely used Language for writing mobile applications. As one of the most popular mobile development platforms, Java is primarily used to create desktop programs, back-end web infrastructure, and Android applications. It employs a JVM that runs nicely on all platforms. Due to its extensive history, Java has a strong community ready to assist users with any technical issues they may experience. Therefore, it is regarded as one of the best platforms for eLearning app creation.

Python has gained popularity among corporations and leading corporate groups in recent years. This Language acquired popularity due to its capacity to give superior outcomes, agility, and user experience to its clients. Multiple portals have ranked Python as one of the best languages for developing mobile applications. Python’s particular and straightforward grammar, which resembles English, makes it simple to comprehend. Due to these characteristics, Python is an excellent option for beginners. Python also supports cutting-edge technologies such as AI, Machine Learning, Big Data, and Robotics, making it one of the top languages for eLearning application development.

Ruby is yet another programming language used by web developers, contributing to the framework of Ruby on Rails. Ruby is the most user-friendly programming language for developing online mobile applications, especially for beginners, and it has a strong and welcoming community support network to assist you with any challenges. E-learning platforms utilize Ruby on Rails to power their online presence.

PHP is such a powerful programming language that it’s a wonder PHP designers enjoy themselves. Since PHP is a server-side programming language, it creates dynamic and intelligent websites. It may be included in HTML code or incorporated into web content management systems and frameworks. In addition, PHP can be utilized for independent graphical and CLI apps (command-line interface).

HTML5 (HyperText Markup Language Version 5) has gained considerable interest recently due to its cross-platform capabilities, rapid commercial implementation, and multimedia support. HTML5 can be used to create web-based mobile applications, similar to how HTML aids in building websites. HTML5 may be used to construct apps for iOS and Android devices due to its tremendous flexibility. HTML5 is likely the most delicate Language for developing eLearning applications.

Since its introduction to the development community, Kotlin’s popularity has skyrocketed, and it has been the sole Android programming language. Kotlin has lately been ranked among the top 10 programming languages for mobile applications on multiple Q&A websites. Its popularity is partly because of its interoperability, ability to operate on Java Virtual Machines, and flexibility in front-end and back-end development.

The C# language is a sophisticated object-oriented language derived from C. Since it is developed from C, its syntax is identical to C++ and Java. C# enables designers to create a single cross-platform iOS and Android app on Xamarin rather than two distinct Swift and Java applications. Using the power of the Unity engine, you can generate game-like material with C#, making it a potential game-changer on this list of the top languages for eLearning app creation.

BuildFire.js employs JavaScript and the BuildFire SDK, allowing mobile application developers to create mobile applications utilizing the BuildFire back-end rapidly. Numerous modules inside the program constitute at least 70% of typical business scenarios. Therefore, designers must concentrate on making the unique functionality required by the consumer. By utilizing this Language, 40% of development time can be saved. It is highly adaptable, user-friendly, and straightforward to master. BuildFire.js may be used to construct applications atop existing frameworks, making it easier for designers.

It is relatively simple to rank the top 10 programming languages for app development. But it is not easy to select a programming language that is optimal for all mobile app developers. Even if technology continually evolves, the languages listed above will remain relevant. You can learn another language faster if you already know one. You will appreciate the significance of studying many Languages to boost your domain expertise.