How does a Pelton Wheel Turbine work? 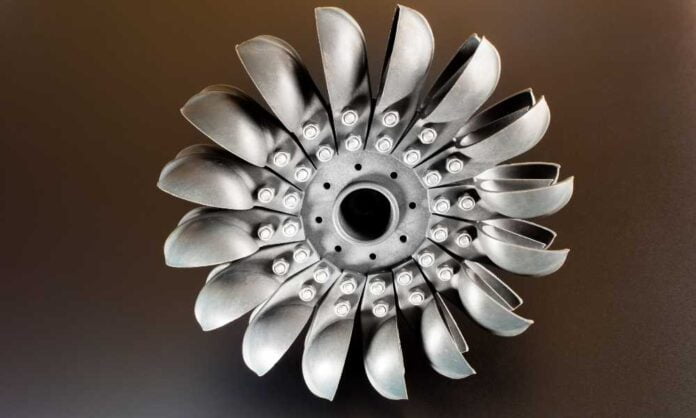 Pelton wheel turbine is a kind of tangential flow impulse turbine, in which the pressure force of the water is converted into energy that travels to produce a high-speed jet of water, with the wheel spinning. It is also called a Pelton turbine. It is different from a reaction turbine, such as a reaction turbine doesn’t change the flow direction while a Pelton wheel turbine changes the flow direction. 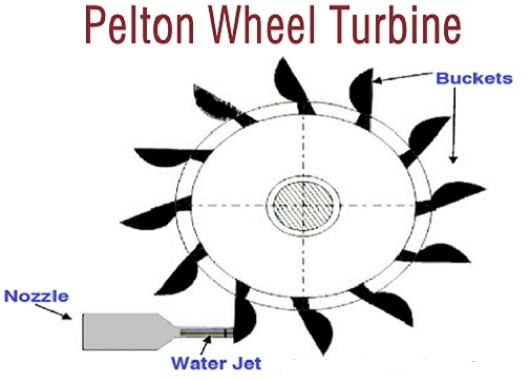 The Pelton turbine working principle is as follows:

Check out: What is a Kaplan Turbine? Working and Components

The Components of the Pelton Wheel Turbine are as follows.

Penstock controls the flow of water and can also be used as a guide for the flow of fluid. It is like a channel or tube.

The nozzle is used to increase the force of movement of the water and the impact on the bucket connected to the runner.

When the spear moves back and forth respectively, the water flow rises and falls and can operate with a handwheel (axial action).

A casing is the most important component of the Pelton wheel turbine. The entire arrangement of rails and buckets, inlets and brakes are covered by the casing. The Pelton turbine housing does not perform any hydraulic operation but prevents water from exploding during operation and helps remove water from the tailrace.

The advantages of the Pelton wheel turbine are given below:

The disadvantages of Pelton Wheel Turbine are following:

The application of Pelton Wheel Turbine is following:

Check out: What is Reaction Turbine? Types, Pros and Cons

In industrial applications, motors are used in various ways. For example, they enable robotics that complete various functions or provide the torque required for...

What is a Syringe pump? Purpose and performance

What is a Screw Pump? Advantages and Installation

What is a Hand Pump? Types and Working

What is a Crossflow Turbine? Components and Application

What is a Vacuum Pump? Types and Applications

What is a Rotary Compressor And How Does It Work?

What is a Jet Pump? Types and Applications

What is a Positive Displacement Compressor?

What Is A Fuel Pump And How Does It Work?

What is Submersible Pump? Types and Applications

What is a Solar Water Pump, And How Does It Works?

A solar water pump is a pump that uses solar energy...
Mechanical Engineering

What is Reaction Turbine? Types, Pros and Cons

A reaction turbine is a type of turbine that can generate...
Mechanical Engineering

What Is a Reciprocating Compressor? Pros & Cons

A compressor replaces a volumetric machine that uses a piston to...

What is a Reciprocating Pump? Working and Types

A reciprocating pump is a positive displacement pump in which a particular volume of liquid is collected in a closed volume and discharged using pressure for the required application. The reciprocating works on the principle of pushing the fluid through the piston, which rotates in a closed...

The positive displacement pump (PD) transfers the fluid with the aid of repeatedly trapping a set quantity and robotically agitating it inside the device. The pumping movement is cyclical and can be pushed with the help of using pistons, diaphragms, or blades.  Types of Positive Displacement Pump There are...

What is a Centrifugal Pump? Working and Components

A centrifugal pump is a mechanical device that uses centrifugal force acting on a liquid to convert mechanical energy into hydraulic energy. It is the most popular and widely used type of pump for the bottom to top liquid transfer. It uses in agriculture, municipal services, industry,...